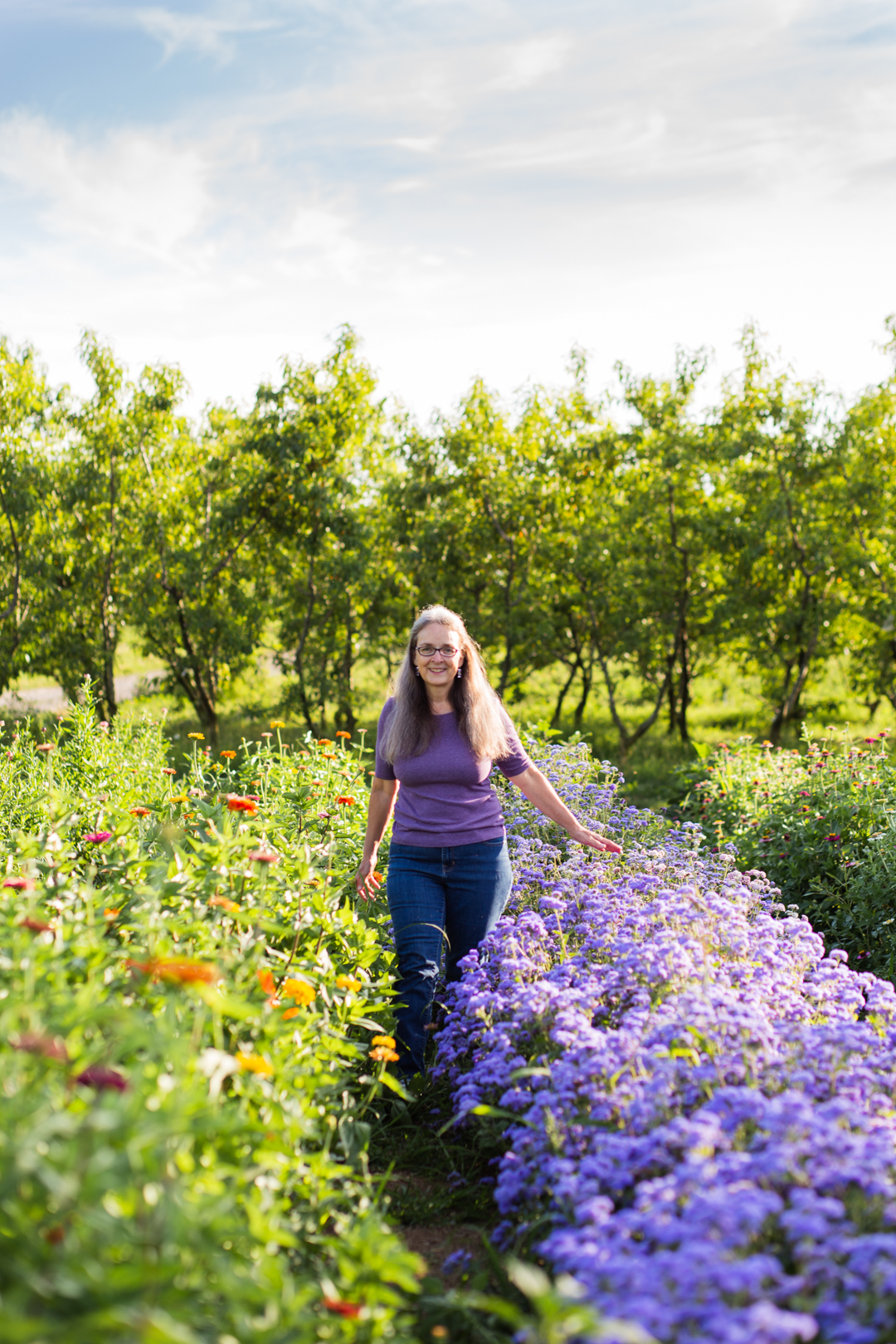 The Finger Lakes Region of New York State is often referred to as bucolic. Glacier-carved lakes surrounded by rolling hills that are home to hundreds of farms, small towns, and vineyards. The region, centrally-isolated, is also home to Cornell University and Amie Hamiln.

Amie operates her own veganic garden, Growing Peace Farm, featuring a variety of fruit trees, berries, and vegetables, including kale, green beans, Swiss chard, carrots, cilantro, and beets, to name a few. Amie also happens to be the Executive Director of The Coalition for Healthy School Food; these two things are related.

As the Coalition grows, Amie hopes to do more with school gardens, so having knowledge about how to grow food is important. As this is a relatively new endeavor for her, she hopes that eventually local students will be able to visit and learn about growing plant foods.

A demonstration project that she is planning involves growing varieties of mint, including chocolate, pineapple, strawberries and cream, and other types with exciting names to supply to area schools to make delicious flavored water. While schools are required to offer water, the more readily available and appealing it is, the more likely children are to drink it. This is important because there is evidence to indicate that when water is available in schools, children drink less milk.

While school meals have 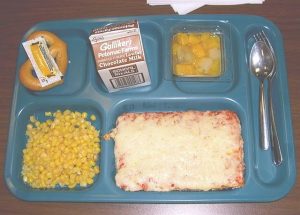 improved since 2012 when new regulations were introduced, and offer a variety of vegetables, fruits, and whole grains, there are still problems. The main dish is almost always meat or cheese-based and milk must be offered (in most cases it does not need to be taken). The way that Americans are eating has resulted in nearly 70% overweight and obesity in adults and 34% in children. Cases of type 2 diabetes are skyrocketing — even in kids. Heart disease is on the rise, resulting in kids as young as 8 years old on cholesterol and blood pressure lowering drugs. Constipation is also an issue affecting many students. It’s Amie’s and the Coalition’s mission to change this. The biggest areas for improvement are reducing animal-based entrees and introducing healthy vegan entrees, and to offer non-dairy milks as an option for every child.

“So many students depend on schools for food. For many, it is their primary food source on school days, and children of color are disproportionately impacted when school food is not as healthy as it can be. It’s not enough for schools to just feed kids. They need to feed them healthy food – and just because meals meet the USDA regulations, it does not mean they are healthy.” 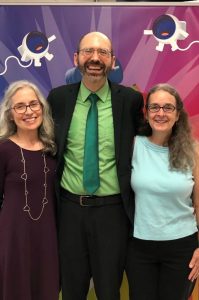 Amie co-founded an organization dedicated to changing minds and changing menus and their focus has been targeted to schools across the country. She has been inspired by thought-leaders in the plant-based world and many of them serve on her advisory board: Dotsie Bausch, T. Colin Campbell, Ph.D, Fran Costigan, Brenda Davis, RD, Joel Fuhrman, MD, Tracye McQuirter, MPH, and Milton Mills, MD, among other experts in the field. Michael Greger, MD, is on the Board of Directors.

At a school in Harlem, the Coalition had vegan restaurants cook lunches and encouraged parents to sign up for the free meals which they distributed to students as they entered the cafeteria. Amie then asked if they could bring a vegan chef into the school kitchen and was able to bring award-winning chefs from New York City’s Candle Cafe to work alongside the school food service professionals preparing recipes and feeding vegan meals to students. 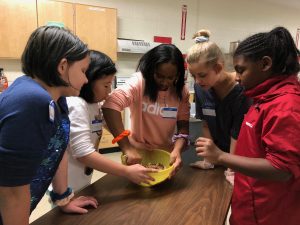 In addition to PS244, the other schools include PS343 Peck Slip in Manhattan, PS971, the School of Math, Science, and Healthy Living, and PS90, The Magnet School for Environmental Studies and Community Wellness. They have continued working together with the Office of Food and Nutrition Services to move the menu in a more vegan direction. There have always been vegan options on the vegetarian menu, but the Coalition would like to see all options be vegan. In addition to the vegetarian schools, the Coalition works with many other schools in New York City, offering vegan Family Dinner Nights (pre-pandemic, and will again post-pandemic) with vegan medical doctors as speakers at the events, as well as teacher professional development and parent presentations. 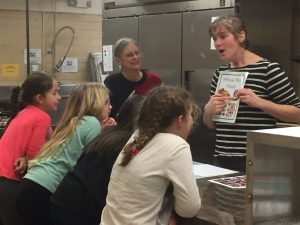 options for kids powers their bodies and their minds. Amie’s work requires discipline and diligence. In her approach she reaches principals, district leaders, superintendents, parents, food service directors, and more. Every school district is different and while all must follow the USDA federal regulations, each has its own set of challenges and oftentimes requires a more creative approach.

Amie didn’t start out as vegan and had her own journey to where she is today. In 1979, while a junior in college, Amie decided to become a vegetarian, due to an experience at the local SPCA.

Amie’s mother had just started as Director of the shelter in 1979, and, in those days, before the great spay/neuter and adoption campaigns that exist now, more than 90% of the cats and dogs that were brought into the shelter were euthanized; killed in a decompression chamber. As soon as she started the job, her mother, compassionate toward animals herself, immediately applied for the ability to use the more “humane” option — injection.

Before that happened, a curious Amie peered through the door window of the decompression chamber and witnessed several dogs being killed. Many things went through her head at that moment. Amie realized how this was unnecessary death because people had been irresponsible with companion animals, and how her own food choices were also causing unnecessary death and immediately became a vegetarian.

It was that day that Amie’s own ethical decisions would steer the course for her future calling.

In 1985 Amie moved to Detroit and found herself discovering health food stores and Vegetarian Times magazine. In 1989, just before leaving to move to North Carolina, Amie discovered an article in Vegetarian Times, “What About Dairy and Eggs?” written by Victoria Moran. She realized that dairy and eggs also caused suffering and immediately cut them out of her diet. Then, upon arriving in North Carolina, she attended Tom Reagan’s “Festival for Animals” event and joined his group. John Robbins, the author of Diet for a New America was giving a keynote speech and that’s when Amie realized it’s not just about the food and immediately became 100% vegan. She went home and packed up her feather pillows, leather shoes, wool sweaters, and mailed them all off to her sisters and changed what personal care products she purchased.

After working with her friend Jennifer Greene to change the food in her stepson’s and Jennifer’s son’s school, Amie was recruited by Farm Animal Rights Movement (FARM) and Animal Welfare Trust in 2004 to write a New York State legislative resolution, which passed unanimously, and then co-founded the Coalition for Healthy School Food. She, along with her team, changes food in schools and provides plant-based nutrition education so students, and the whole school community, are armed with knowledge about nutrition, their health destiny, the impact of animal agriculture on climate change, and information about animal compassion.

It is the Coalition’s hope that this will inspire more change within the school for all the students who attend and all the adults who work there, and with the hope that students will bring home the message to their families. In addition to schools in New York City and Ithaca, NY, they have ongoing partnerships with other school districts and also provide help to any district that asks for it. All the vegan recipes that are on the school menu have corresponding family size versions that students take home after taste-testing the recipes in the cafeteria and cooking them in Family and Consumer Sciences classes or after-school cooking classes. 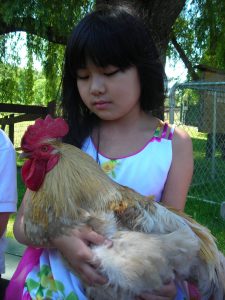 healthy and sustainable foods continue to the dinner table providing opportunities to also change views in a compassionate way. Her work is early intervention, as children are eager to learn and naturally compassionate.

“I think changing food in schools is so important, so students have knowledge about food and their own health destiny, and can bring that knowledge home to their families, so they suffer less and are healthier in general, as well as understanding the impact of food on the environment.” Amie said. “And we have found over the years because public awareness is on the rise and the great work of animal rights organizations like FARM, that we are no longer hearing complaints when we do talk about compassion for animals in the schools.”

Amie is grateful to all those who have helped to move our society toward a plant-based diet. She believes that switching to a vegan diet is the most effective way to save human and animal lives, and her hope is that animal rights activists continue to learn ever more effective ways of communicating with others, in order to create even more change.

With two meals per day 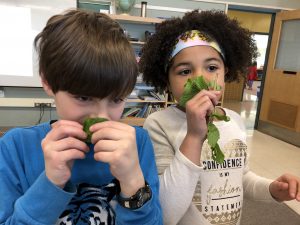 during an average of 180 school days per year, the school cafeteria is where many school-aged kids get the majority of their nutrition on school days and it’s our own tax dollars that pays for the food – so let’s make it health promoting, and climate and animal friendly.

And the time to change is now: food is grown, not born.

March is National Nutrition Month and an excellent opportunity to reach out to your own daycares and school contacts to start the dialogue about offering more plant-based options on the daily menu. Start with an email, join the PTA or PTSO, host meetups and potlucks, or reach out to The Coalition for Healthy School Food for support. You can learn more about strategies on how to change the food in your school here. Together we can all inspire change where it matters most: our next generation.

For more information on The Coalition for Healthy School Food and for tips on how you can support the movement and get involved, visit their website at healthyschoolfood.org. 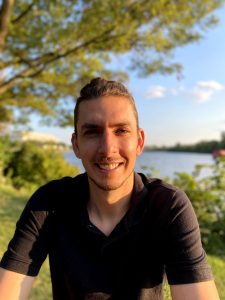