Proactive things we can do to decrease our risk of cancer and other chronic diseases through food.

Thank you to everyone that attended the presentation. The full recording will be available on YouTube and Vegan Videos soon. Below are some helpful resources from Gwyn Whittaker to get you started on your life-changing, plant-based journey (links launch websites not affiliated with FARM). 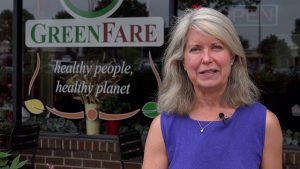 Gwyn initially became enlightened about what it means to be healthy by watching the 2011 documentary Forks Over Knives.

The heartbreaking loss of her 50-year-old fiancé to heart disease in 2010 would spark a new direction for Gwyn. As a South Carolinian, her fiance’s meals were always fried or barbecued, and always included large portions of animal flesh.

As a vegetarian since her twenties, Gwyn thought, like many of us, that a low-carb diet was the key to staying slim and fit.

Forks Over Knives provided Gwyn with such a wake-up call she reached out to Dr. T. Colin Campbell, co-author of The China Study, who was kind enough to meet her and ignited her mission to share this knowledge with others.

In February of 2015, in partnership with Colin’s oldest son, Nelson, Gwyn launched a JumpStart program in Reston, Virginia. As seen in the film PlantPure Nation, Gwyn, convinced 45 friends and associates to try a 10-day diet change study with recorded results. Blood testing was done before and after the ten days of an oil-free whole-plant diet and with Dr. Campbell kicking off the program.

Across the board, the results were too amazing to deny. Not only did everyone lose weight, but their cholesterol also dropped by roughly 20% (some more), and many discontinued their medications. All this in just 10 days.

After phone calls and life-changing thank you notes started pouring in, Gwyn knew she needed to continue to spread the word and take the program even further. She realized by serving the right food and providing education she could reinforce this knowledge through a community of people who care about their health, and the impact of their food choices on the environment and the lives of animals.

In November of 2015, Gwyn along with Pericles Silva, previously of Whole Foods,  opened GreenFare Organic Cafe as an educational restaurant. The successful restaurant, located at 408 Elden St in Herndon, VA is dedicated to delicious functional food that heals your body as it aligns with the optimal diet proven by science.

Our educational webinars along with all of our other wonderful programs only exist with your support.
Please consider an end-of-year Gift to FARM so we may continue standing up for animals.

CHEERS TO A VEGAN FUTURE!